We went to the Bo Johnson candlelight vigil last night at the Sister Bay Marina.  There were hundreds of people including our Emilie and her friend Cole.  Most people were wearing orange for Bo.  What a great community we have… it was really nice.

Since we were heading up to Sister Bay we stopped in at The Sister Bay Bowl to see if my niece Kate Hastings was working.  We were in luck, she was! 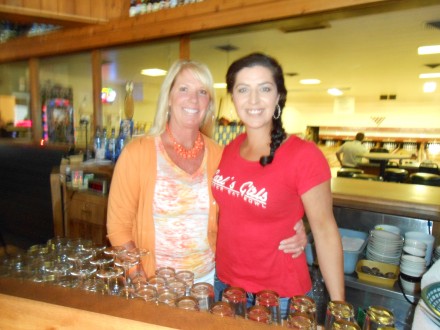 After that we went to the new restaurant Chop.  I had made reservations for 6:30 so we parked on the garden level of the Country Walk Shops which is where the restaurant is located.  They have outdoor seating so we chose to sit outside.  We met the hostess who was one of the owners.  Then when our waitress came she was the daughter of the owners.  Not to left out we asked to meet the chef who was also an owner.  A true family business just like ours. Meet the Wuoletts… 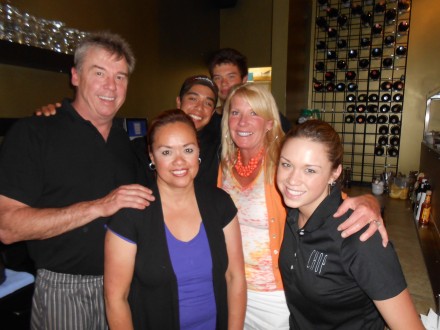 The restaurant is small and cozy with seating for less that 50 people so reservations are a good idea.The food was a.m.a.z.i.n.g.  I had the house red which was really good and Mark just ordered a Corona.  They had a nice wine list as well but not knowing a lot about wine and Mark not drinking it I just got the house.  For an appetizer we ordered clams steamed with white wine and herbs.  Super delish.  I couldn’t make up my mind for the entree.  I have been on a low carb diet since the middle of May so I was ready to eat a horse. We both ordered the soup of the day which was sherried French Onion and it was fabulous.  I decided on their seafood pasta which is served scampi style so there wasn’t a heavy sauce on it.  It was packed with shrimp, scallops and baby mussels.  I thought it was perfect.  Mark ordered a rib eye. You get a choice of no less than four butters which included the house butter which is what Mark ordered to top his steak.  We don’t usually order steak since Mark’s sister and her husband raise steers and you can’t get better steak than that… or so we thought.  His was  cooked perfectly medium for him. He loved it. SO tender and good. He also had the mashed potatoes. We were too full for dessert… damn.  Check out Chop you won’t be disappointed.  The people are great and so is the food.

What a nice night, seeing my niece, a fabulous meal, meeting new people and the touching vigil.  I get to  live in Door County…wow.