WHAT’S UP WITH A FISH BOIL?

Did you know that fishermen have always been an integral part of the history of Door County?  Since the first settlers arrived in Door County, fishing was key to their survival.  Many of the villages sprouted from fishing docks and piers which you can still see some today.  For generations, men and women rise early to head out on the lake to catch the prized whitefish which they would sell to local restaurants and stores.

Why, a Fish Boil?  Fish Boils were started by the Scandinavian settlers as an economical way to feed large groups of fishermen and lumberjacks.  Since then, they have become an integral part of Door County.   Fish boils haven’t changed much over the years.  They function the same way they did 100 years ago.  It all starts with a hot wood fire under a kettle of salted water.  The basket is filled with small red potatoes, onions and Lake Michigan whitefish and then the wait until the water is brought to a rolling boil.  Then, at the right moment, a dose of kerosene is tossed on the fire.  The hot fire creates a “boilover”.  Most restaurants typically serve coleslaw, bread and Door County Cherry pie.  It’s something you don’t want to miss during your visit to Door County. 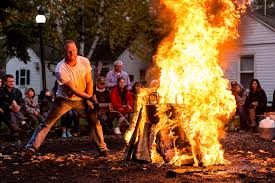 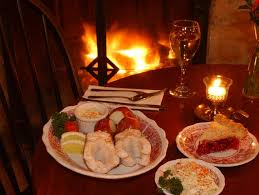