Have you ever driven by some unique things in Door County and wondered the story behind them? The Door County Pulse took the time to explain some of these unique sights in Door.  I thought I would share their pictures and summarize the stories behind the sights. 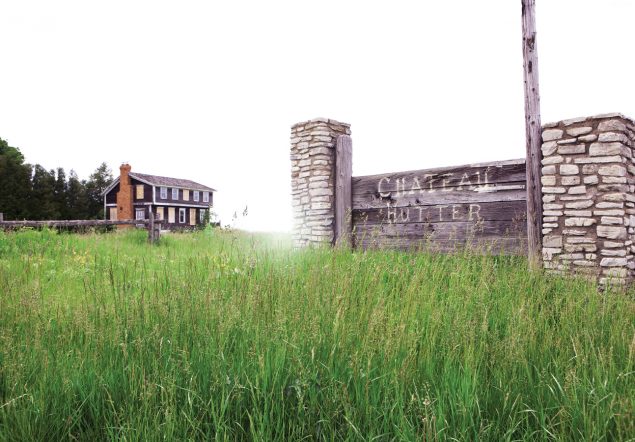 CHATEAU HUTTER — If you are traveling down Bay Shore Drive from Egg Harbor to Sturgeon Bay you will notice abandon buildings on the bay side.  The complex is called “Chateau Hutter”.  It was a dream of John Hutter to create a resort similar to what you’d find on the French Riviera.  In 1950 he opened his 320 acre resort.  The resort never lived up to his over-the-top dreams.  In 1965 the Door County Chamber of Commerce refused to accept his dues and Hutter said put him out of business.  The property has sat empty for 50 years and is currently owned by his daughter. 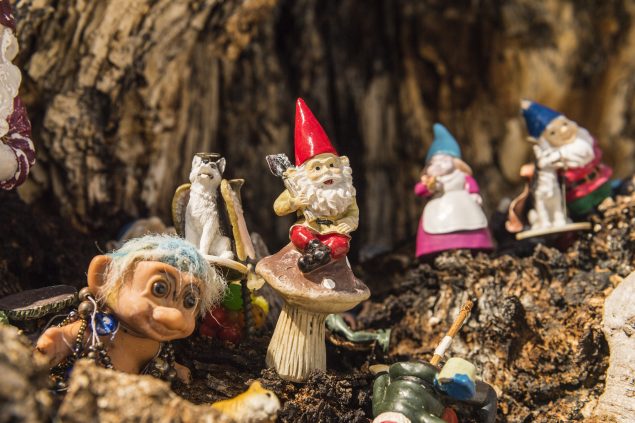 GNOME TREE OF FISH CREEK — If you are in Fish Creek head to the northwest corner of County A and Gibraltar Road and you will discover gnomes and other things perched in the trunk of an old tree.  A woman who continued to receive gnomes as presents, decided this tree with the hole should be the place that the gnomes should live among other things.  Even today, others have added to the Gnome tree. 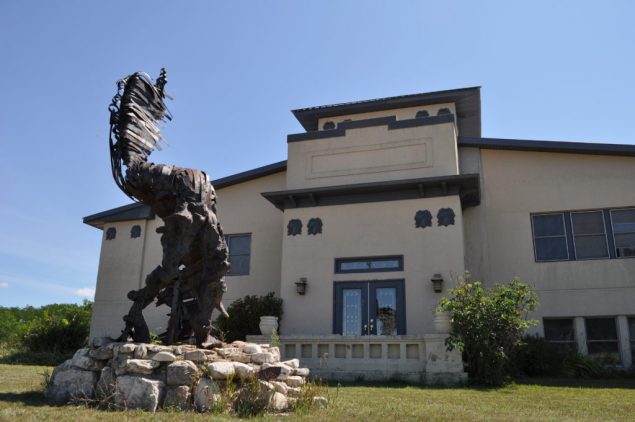 THE VALKYRIE —  A couple of miles south of Egg Harbor on Hwy. 42, you will notice a sculpture directly across from Sunnypoint Gardens.  The sculpture was made from shallow remnants of an old shipwreck.  The steel was pulled out of the water and the sculpture was designed by artist, Janis Mintiks.  It stands outside the old schoolhouse because Janis had no where else to put it as  Janis lives in Taco, New Mexico.   She gave the sculpture to a friend before the tornado of 1998 hit the county.  It was originally behind the schoolhouse.  After the tornado hit, the Lion’s Club was there to help clean up.  The crew found it and thought the tornado made a mess of it.   They added a few parts and placed it in front of the old schoolhouse and it still stands there today. 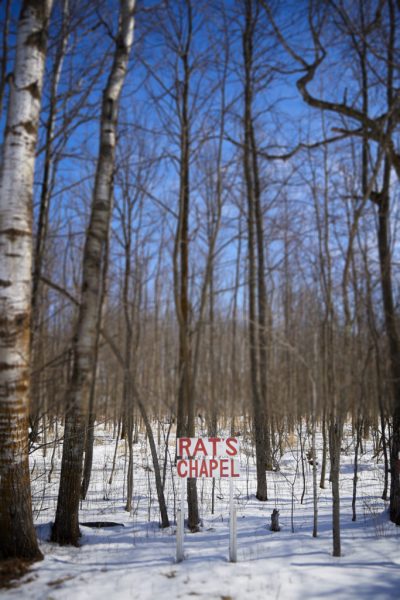 RAT’S CHAPEL —  County Road S between Sturgeon Bay and Algoma you probably wouldn’t see a sign stating “Rat’s Chapel”.  Dale “Rat” was a logger and certainly didn’t have a chapel.   It turns out that Rat enjoyed the company of women in his trailer after bar time on his property.  Rat was a gentle soul who suffered from depression.  The posts were erected sometime after April of 2002 when Rat was found in the woods off Helmholz Road.  He killed himself.  He lived in the woods, that was Rat’s life. 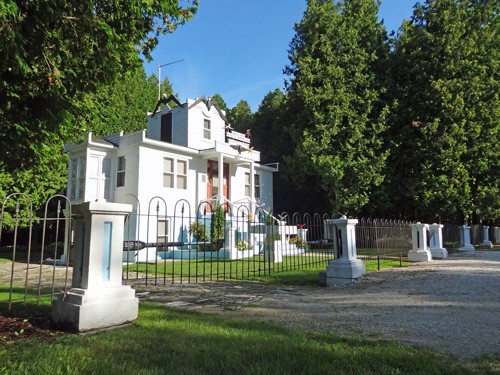 BAILEYS HARBOR BIRDHOUSE — Just north of Baileys Harbor on Hwy. 57, there is a white and blue painted structure.  In the summer you will find a collection of carved wood birds that are storied as the man who carved them many years ago.  Albert Zahn, a German immigrant, came to the United States in 1879 as a teenager.  He began building the house in early 1900’s.  The walls are 8″ thick and added logs stretching two stories high for additional support.  Zahn was a wood worker.  When he retired, he sold his wood birds for 35 cents each.    After his death, his family eventually sold the property and the new owners had the financial means to restore Zahn’s home.  His property is on the National Registry of Historical Places.