THE LEGEND OF “DEATH’S DOOR”

How did Door County get it’s name?  The area was mainly inhabited by the Potawatomi Indians.  Stories have it that a group of Winnebago Indians traveled to the tip of the peninsula and found it occupied by the Potawatomi, who offered to share the land.  The Winnebagos refused and attacked the Potawatomi.  During the fight both lost many men and canoes in the waters crossing between the tip of the peninsula and Washington Island.  The Winnebagos lost the fight and took it as an omen that they should never cross between the point and Washington Island.   The Potawatomi called it “Door of Death”.  Early French explorers translated the name that the Potawatomi gave the dangerous passage to “Port des Morts” (“port day more”) which became “Death’s Door” in English.  The water between Green Bay and Lake Michigan was treacherous to many ships.  There are many shipwrecks scattered over the lake floor.  Door County got it’s name after the treacherous strait between Door Peninsula and Washington Island. 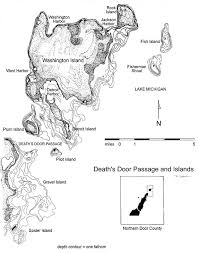