The Peninsula Players Theatre’s 87th season has been announced!  The season will open with the romantic play, THE RAINMAKER by N. Richard Nash.  It’s focuses on The Curry family as they try to keep their cattle ranch alive during a drought, while their only daughter, Lizzie, deals with her lack of romantic prospects.  Lizzie is concerned she will end up an old maid.  Then a charming stranger comes into her life, promising to bring rain, he might answer both problems.  The play is filled with romance and humor.  The play was inspired by the 1956 film of the same name and the musical “110 In The Shade”.

Next is a thrilling mystery WRITE ME A MURDER.  Frederick Knott who wrote WRITE ME A MURDER is also known for “Wait Until Dark” and “Dial M for Murder”.  In this play, two brothers are dealing with the sale of an old family estate to a brash investor.  The younger of the brothers, a mystery writer, teams up with the investor’s wife, also a writer.  They dream up the perfect murder.  The plot has many twists and turns.  The play will keep you guessing right up to the end.

The third play is a comedy by Pulitzer Prize-winning author David Lindsay-Abaire.  In RIPCORD, you meet mismatched roommates at an assisted living facility.  Abby is not happy about sharing a room with a new resident, Marilyn.  Abby proposes a seemingly harmless bet in hopes of getting Marilyn moved to another room.  The pair go to incredible lengths to win.  This hilarious odd couple will stop at nothing, no matter how great the mischief!

The fourth play is written by Lauren Gunderson, I AND YOU.  Caroline and Anthony are high school classmates who have never had much interaction.  Caroline was out of school for months due to an illness.  She is surprised when Anthony arrives to work on an English assignment with her.  At first, it seems they have nothing in common.  We see their developing friendship as the two spar, laugh, and begin to uncover the mystery that may have brought them together.  It’s a very moving play.

To end the season, they close with a funny and inventive musical, MURDER FOR TWO.  When a famous novelist is murdered at his own surprise party, all of the guests become suspects.  The play spoofs every beloved mystery device from the board game Clue to Agatha Christie. 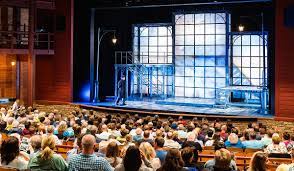 If you are looking for a place to stay, we still have rooms available!