As you enter Egg Harbor, you will find a charming village along the bay of Green Bay.  Some of the buildings date back many years, while some are fairly new.  I enjoy history and thought it might be interesting to learn more about the buildings and land from times gone by that still remain in the village.

THE ALPINE RESORT AND GOLF COURSE

I was surprised to learn that Paul and John Bertschinger built the largest resort in Door County, “The Alpine Resort”.  Fred Bertschinger designed the buildings.  They opened the resort in June of 1922.  The resort had 20 cottages with indoor plumbing a luxury at the time.  The ice from the harbor provided refrigeration, cut in the winter and stored in an ice house for the summer.  1n 1925, electricity arrived, but prior The Alpine produced its own with a large motor that powered a 30-watt bulb.

The dirt roads made traveling to Door County challenging.  Many guests would take a steamship or train to Sturgeon bay.   The Alpine provided guests with the American Plan, which their weekly rate included three meals a day at set times.  They provided many activities for kids and adults.  The resort has since closed and is for sale.  We hope someone buys it and brings it back to life! 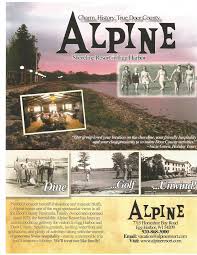 Orin Glidden developed a 9-hole golf course adjacent to the Alpine Resort and called it the Alpine Golf Course.   It was expanded in 1948, 1976 and 2002.  Another fun activity for Alpine’s guests.  The golf course is closed and is also up for sale. 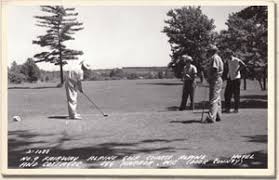 I was surprised to learn that Horseshoe Bay Farms was an early site of a Settlement from 1870-1890 called Horseshoe Bay and/or Cooperstown.  Egg Harbor at that time wasn’t much more than a fishing hamlet.  The Horseshoe Bay Settlement had a school, general store, post office and 40 settlers.  In 1870, Andrew Andersen built a pier south of Murphy Park.  He built a sawmill, blacksmith shop and a coopers shop which made barrels.  The coopers sold their barrels to local fisherman, which were shipped to larger cities in the Midwest.  That’s how Horseshoe Bay also became known as Cooperstown.  The community existed until 1890.

In 1917, Frank Murphy purchased the land to develop a dairy farm, orchard, park and housing.  His White Holstein herds were famous nationally for years.  Did you know that Horseshoe Bay was never suppose to be a farm?  I was surprised to learn the vision was for a resort community.  They intended to build a hotel and make 50′ lots.  Plans shifted to building a clubhouse and an elite golf course.  The Club House was built, but never went anywhere.  The United Fruit Growers who were part owners of the land, sold their share to Elbridge and Frank Murphy who named it Murphy Farms and the rest is history.  Glenn Timmerman who now owns the property is planning to restore it as a historic site. 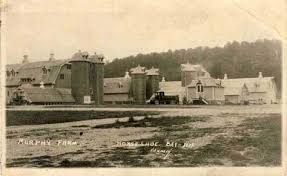 The beautiful structure is a place you will see bridal parties taking pictures. 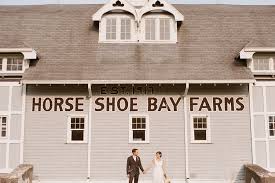 In 1935 Frank Murphy donated this park to the County of Door. The beach has been the scene of many summer gatherings.  The park is a popular rest stop for three Door County century bike rides, the Peninsula Century Fall Challenge, the Door County Century Ride, and the Spring Classic. 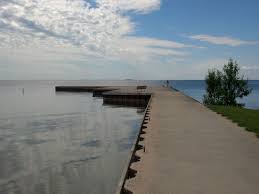 This log cabin which still stands today is one of Door County’s great ambassadors.  In 1939, Chief Roy Oshkosh came Door County.   He built his Indian Trading Post on the campsite of his ancestors.

Chief Oshkosh was well-known throughout the state for his pageants, his work with Boy Scouts, and as an honorary member of the Order of the Arrow, the first Indian in the U.S. to receive the honor.

Oshkosh became chief of the Menominee Indians after his father’s death in 1932. 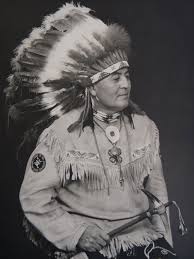 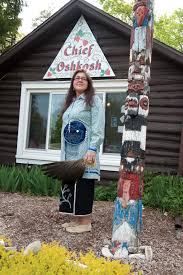 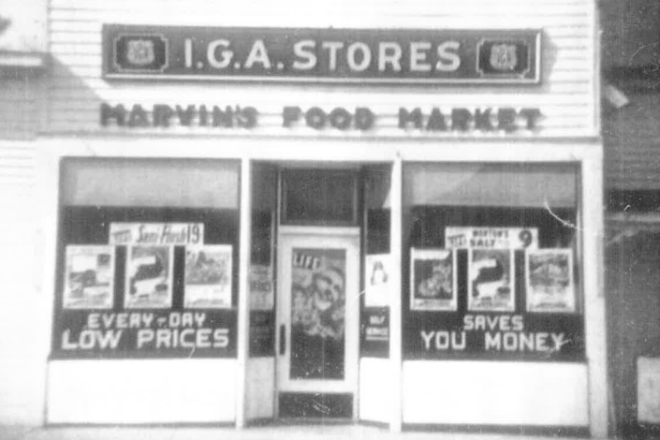 The Maxwell House is one of the stores that has been around for decades.  T Charles and Delia LaRouche built the shop in Egg Harbor in 1885. The beautiful, pressed-tin ceiling in the new store came from the original Catholic church in Egg Harbor after Charles donated the land for the new church.  Hard to believe, the store was built to fit the ceiling. Best remembered for grocery stores, especially Trodahl’s and Witalison’s – and actually, they were the same store.  Marvin Trodahl was a butcher whose aged beef was award winning.  The store had everything one might need.  In addition, there were two owners before Marvin and Agnes Trodahl, two between the Trodahls and Art Witalison, and one after Witalison before it ceased being a grocery business.  The Trodahls sold their business in 1963.  Their were many owners until it sat empty for a few years before it was purchased in 1994 and turned into The Maxwell House that still remains today.  Shawn and Karen Peterson purchased the property in 2001 and restored the ceiling with as close to a match as the original.  I can’t forget to mention that back in the day, the north end of the building was the Post Office which was recently “Jane’s Clothing Store” until Jane retired.

Corner of Hwy. 42 and County G

in 1904, John Bertschinger, a Swiss, came to Egg Harbor and bought the Kewaunee House.   He enlarged, remodeled and added a dining room to the facility which he named the “Harbor Inn”.  In 1912 he sold the Harbor Inn to Murphy Moore.  Murphy’s was a popular spot to stop for dinner.  Later it would become the Thimbleberry, The Blue Iris before becoming the Shipwreck which remains today.

This is one of the original buildings of Egg Harbor.  Unfortunately, a fire destroyed the building a few years ago.  Some say that Al Capone once escaped from the Feds here, and other say it was haunted.

Hwy. 42 north of the Shipwreck

Back in the day, Harbor View Park was the site of a grocery store built in 1910 by Jim and Rose Wilson.  Later, a building was built by Tom Carmody in 1935.   They ran it for eight years before selling it to Donald Giesseman in 1943, who named it “Don’s Bar”.  After Don’s death, Schultz/Giesseman children continue to run the tavern for 52 years, changing the name to Lena’s Sip and Chat in the late 1960s.  Thereafter the pub has been named Salmon Eddy’s, The 19th Hole, O’Leary’s, Bub’s Pub, John Henry’s, and The Jersey Shore.  The building has since been demolished. 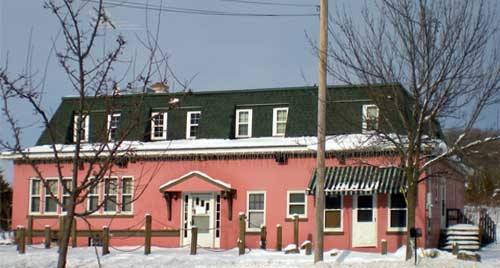 The Cupola House was built in 1871 by Levi Thorp.  Thorp paid for the Cupola House with money he got during the California Gold Rush.  It was a Bed and Breakfast Inn and Restaurant.  The floors are white pine brought across the frozen waters of Green Bay from Menominee.  The central hall has examples of early wallpaper.  Cupola House is a wonderful example of Gothic revival style architecture and still remains standing today.

Jerry LeMere’s saloon and dance hall was located where Casey ‘s BBQ & Smokehouse now stands.  The LeMere’s came from Canada and purchased the land in 1865.   A lot of good times have been enjoyed at this saloon. 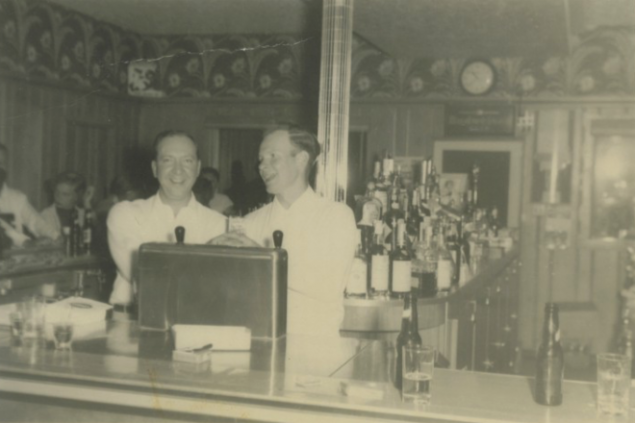 Another early business in Egg Harbor was a saloon-hotel built by Canadian Antone La Plant.  The building burned, and was rebuilt as a stagecoach stop called the Concord Hotel.  Today it is is a pub/restaurant called Mojo Rosa’s. 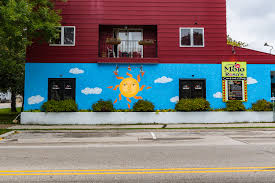 Highway 42 in the Village of Egg Harbor 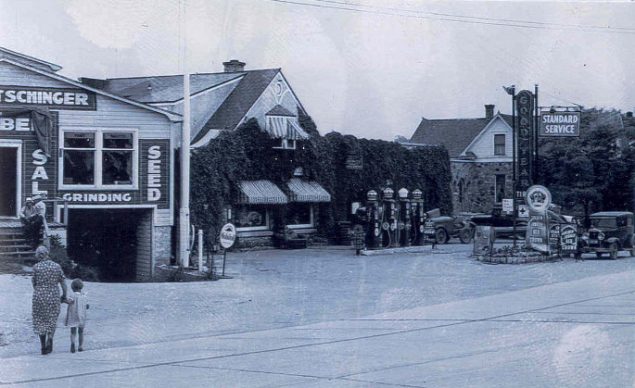 In 1931, Herman Birnschein built his service station and Chevrolet showroom and repaired vehicles.  In 1965, he sold the business to Harry Nell.  Bob Mueller bought the business in 1967.  It was a Texaco station, but they switched it to Standard Oil.  Today Standard Oil/Amoco was absorbed by British Petroleum which it remains today.

Hwy. 42 on the southside of the Village of Egg Harbor

The original building was built in the 1880s to house the Egg Harbor Town Hall.  It was the site of town elections and public gatherings, including a Saturday afternoon movie showing.  After 100 years it’s doors closed as a government building.  The building then became home to the Towne Dresser, an antique shop.  In 2005, it was renovated and is now Patricia’s Shoppe. 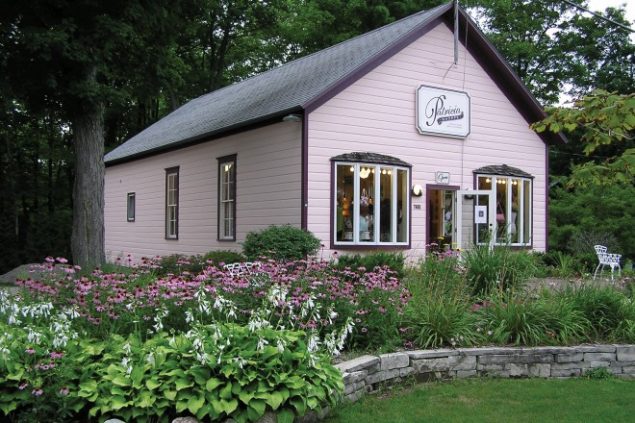 Egg Harbor is one special place!