DID YOU EVER WONDER ABOUT THE CHRIS-CRAFT RUNABOUT INSIDE “ON DECK”?

Not only did we want to know how the boat got in the building, but a little history on Chris-Crafts.

There was a young boy by the name of Chris Smith who enjoyed duck hunting and carved his own decoys out of wood.  Carving wood nurtured his interest in building boats.  Chris and his brother Henry built their first boat in 1874.  Their first boat was a 13-foot skiff which would become the start of their boating empire.

The Smith Brothers expanded their business along the waterfront of Algonac, Michigan.  Chris went onto be sole proprietor after Henry ended up wanting to grow a business around duck hunting.  The company’s name changed to C.C. Smith, Boat Builder.  Chris was most interested in runabouts.  He received his first order for a race boat in 1905.  That was his start of his career building racing boats.  He partnered with Cincinnati Business man, John Ryan after receiving in order for a racing boat from John.  In 1910, they formed Smith-Ryan Boating Company.  Ryan’s spending habits left him practically bankrupt.  Ryan and Smith dissolved their partnership due to the debt owed to their company by Ryan that he couldn’t pay off.  He enjoyed the racing boats, but didn’t pay the company for them.  Chris sold his company to Garfield Wood and stayed on to manage the company along with his sons. 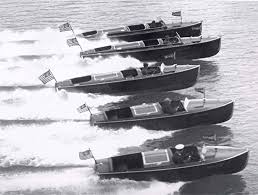 Chris and his sons left the company and formed Chris Smith and Sons and decided to focus not on racing boats, but standardized boats for a larger client base at a reasonable price.  Jay Smith had the idea to name a special model a “Chris-Craft” after his dad.  By the end of the 1920’s, the Smiths built 1000 boats per year generating $3-million in sales.  By 1937 the company offer 97 models.  Jay Smith purchased a 22-acre facility in Holland, MI for additional space.  Unfortunately, Chris pass away September 9, 1939 at 78 years old.  Smith had built a legacy that would shape the boating industry for decades to come.

Living in Door County and shopping at ON DECK store in Fish Creek, I always wondered how did they get that fantastic, sleek Chris-Craft in the store.

Mitch Larson, the owner of On Deck who grew up in Sister Bay remembers his boat rides in his grandfather’s 17′ Chris-Craft Runabout.  It was important to Mitch to offer a visual experience of growing up in Door County in his store.  So, the rest is history.  One day a crew of 2 removed the front window in the store and eased the 17′ pristine 1935 Chris-Craft runabout through the window.  She still sits there today.  Well worth a visit! 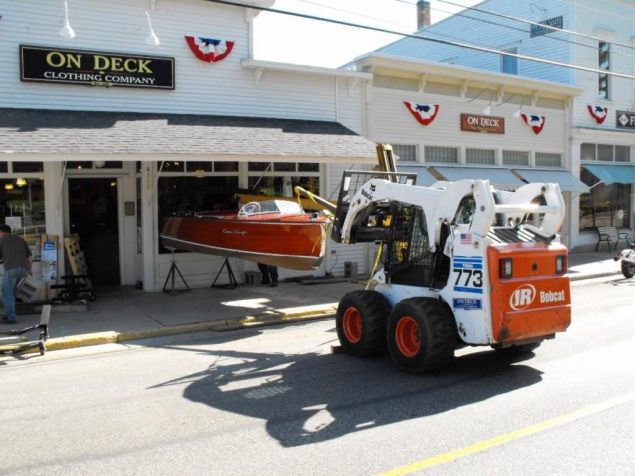