Mark had a game last night, so Joe, his friend Betsy and I headed over to Mike’s Port Pub in Jacksonport to grab something to eat.  Mark’s sister Barbie and her husband Mike Lautenbach own and operate the pub.  All four of their kids have worked at the restaurant over the years so like Egg Harbor Lodge it is truly a family operation.  For a smaller restaurant, they have a relatively large menu with everything from chicken tenders to steak.  I had the small sirloin steak with broasted potatoes and it rivaled any steak I have eaten at a steak house.  Joe of course favors the burgers, and we all had the chicken dumpling soup.  My entree was a special and the soup was included.  Barbie’s chicken dumpling soup is the best I have ever eaten… including my own which is really good.  Mike’s has a huge local following so it is a pretty bustling place on Friday nights.  Had Mark been with us he would have certainly had the perch which is always good.  Barbie and Mike have recently added outdoor seating with picnic tables and a covered area. 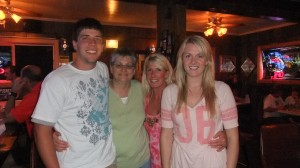 Here we are after our dinner… I always have my camera!

Mike’s dad and uncle owned Casey’s Inn in Egg Harbor for years… Mike’s grandfather was Casey and Barbie and Mike named their eldest Casey as well.  Mark and Barbie’s parents owned what is now Mojo Rosa’s in Egg Harbor which was called Jean and Bob’s Midtown Tap and they lived above the tavern.  So both Barbie and Mike come from families “in the business”.  When I started dating Mark, his parents had the bar and on Sundays in the summer after the Egg Harbor baseball games (which Mark played and coached) EVERYONE went to the Midtown Tap.  Now those were the days… we just had a blast.  After the Egg Harbor New Year’s Day Parade, Mark’s mom would make a venison stew and homemade bread for the crowd… no charge of course.

Mark’s Legion Baseball team won one game and lost the other.  Joe is too old to play this year but Mark has a great group of guys playing.  They boys are between the ages of  16-19.  Best of luck Northern Door Chiefs!

Door County weather for Saturday, June 19… Sunny and 75 degrees!  I am heading up to Ellison Bay to spend the night with my BFF Nancy at her cabin.  We are going to one of my favorite restaurants tonight to eat too… JJ’s!  What a perfect way to spend a weekend.  Lucky me!