I have been wanting to try the festive winter drink, a Bayside Coffee from none other than you guessed it… BAYSIDE!  We went for lunch Tuesday with the first stop being Bayside to try their coffee drink.  I asked our bartender Bill Budelman (who is supposed to be THE Bayside Coffee mixologist) what all was in it but there were so many forms of liquor (151, Jameson, Baileys blah, blah, blah) I couldn’t remember them all.  It was then topped with coffee and whipped cream.  There is also the addition of dry spices like cinnamon and such that lend themselves to the fireworks of the drink… 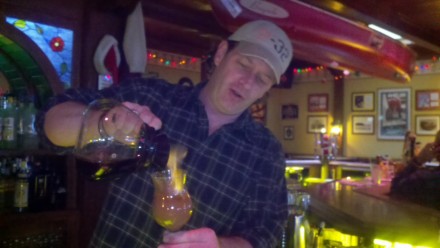 Bill B. doin' his gig

It was delicious…  I would highly recommend ONE.

Then it was off to Husby’s for a burger and then over to the Sister Bay Bowl where we ended up bowling a game with Lucas Willems (I got a 66 if that says anything).  So if you are wondering what we do in Door County in the winter,  most of the time it’s not much but from time to time we have a blast!  Thanks Cole!