Our beloved Egg Harbor Indians have clinched the title for the first time in 22 years this past Sunday.  Mark coached the 1987 team to victory while Mark Stoeger who has been coaching the Egg Harbor team the last few years was the bat boy that year.  Mark’s Dad coached and played, Mark coached and played for Egg Harbor as did his brother Bert, our oldest Josh and our youngest Joe who still plays. Mark’s dad Bob Sawyer was inducted into the Door County League Baseball Hall of Fame ( yes, there is even a Hall of Fame!) last year.  For years, Door County baseball was the activity of choice each Sunday afternoon for many locals and we still try to get to games as often as possible.  We were there Sunday for the celebration which coincided with “Fan Appreciation Day”.  Mark roasted a pig and there was a potluck for all the players and fans afterward.  I snapped this photo of the team after the game… 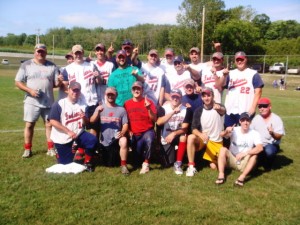 Joe’s Nor-Door American- Legion Baseball team (Mark coaches the team) also went to the State tournament last weekend… sadly they lost one game before the  championship game. Here is our family after the Regional game which was held at our home field in Institute. 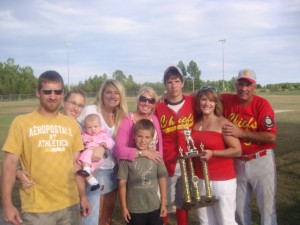