The village of Egg Harbor is known as the “Village of Blossoms and Beauty” but it also should be known as “Egg Harbor… Music Mecca” Our newest venue, the Peg Egan Performing Arts Center has some great artists coming this summer.  The free concerts are at an outdoor amphitheater located on Church Street behind the Post Office in downtown Egg Harbor. From Corky Siegal to Second City, top name performers are here at no cost to spectators… unbelievable!  The concerts usually begin at 7 pm, but check the schedule.  I know there is at least one that starts earlier.  Concessions are available… and bring your chair and/or blanket.

The Village of Egg Harbor Presents

Sunday, June 27, 2010 7 PM
CORKY SIEGEL & THE CHAMBER BLUES
and special guest
DOROTHY SCOTT
Is it blues, is it classical? Walking the line between Beethoven and B.B. King and armed with the creative genius and instrumental prowess that have defined his career for nearly four decades, Corky has pioneered an original, genre-busting Chamber blues – a fresh, innovative sound capturing the sparkling qualities of classical music merged with the emotional melodic style of blues, all within an intimate chamber setting. Under Corky’s lead, The West End String Quartet and percussionist Frank Donaldson complete the Chamber Blues Band. Described by critics internationally as: remarkable, astonishing, extraordinary, hot, mesmerizing, joyous and outrageous fun, their music and concerts have delighted diverse audiences globally and their genre-defying presentations are drawing new and old concert-goers to places they have never been before. And you won’t want to miss Dorothy Scott, who will add a new dimension to Chamber Blues.

A.J. Swearingen and Jonathan Beedle have been performing this remarkable tribute to the music of Simon & Garfunkel for more than a decade and their sold out shows prove the effect on their audiences is undeniable. With a quiet stage and an acoustic guitar, A.J. and Jonathan recreate the memories of both classic hits and and obscure songs of Simon & Garfunkel.

The Wainwright kids have been hogging the limelight recently, but Pops Loudon is back to remind everyone where they heard it first. They’re billing him as “American songwriting legend” on the promotional material, and for once the term verges on understatement. There’s no more endangered a species than the wholly original songwriter, and to watch Wainwright in action is to catch a little fragment of history on the hoof. The only conventional aspects of his work are that he uses a traditional six-string guitar and a piano with the regular number of keys on it, but where another man’s work might end, that’s exactly where Loudon’s begins. And, Corey Carlson puts on a magical show with his bluesy voice and totally original tunes. In case of rain, this concert will be held at Orchards Golf Course, Hwy. 42 N, east on EE, right on Heritage Lake Rd. to 8125

The Second City has been bringing laughter and joy to packed houses all over North America for over forty-five years. Funny and fast-paced, The Second City is ideal entertainment for venues looking to reach both new audiences and old. Whether it¹s a one night engagement or a sit down run, The Second City is always topical, highly interactive and sure to delight audiences. The touring troupes at The Second City have been the springboard for generations of the comedy world’s best and brightest. Its alumni list includes: Alan Arkin, Joan Rivers, Robert Klein, Peter Boyle, Harold Ramis, John Belushi, Bill Murray, Dan Aykroyd, Gilda Radner, John Candy, Martin Short, George Wendt, Julia Louis Dreyfus, Chris Farley, Ryan Stiles, Mike Myers, Rachel Dratch, Tina Fey, Steve Colbert, Steve Carell and more.

Singer-songwriter Jane Siberry is known for such hits as “Mimi on the Beach”, “I Muse Aloud”, “One More Colour” and “Calling All Angels”. She has also released material under the name Issa. Her music has drawn from a wide variety of styles, ranging from new wave rock on her earlier albums to a reflective pop style influenced by jazz, folk, gospel, classical and liturgical music in her later work. Joining her is Special Guest Dorothy Scott, whose feather-light melodies and insinuating hooks make her songs as intellectually stimulating as they are emotionally empathetic.

Howard Levy is a musician without limits. His musical adventures include journeys into jazz, pop, rock, world music, Latin, classical, folk, blues, country, theater, and film. He has appeared on hundred of cd’s, won a Grammy, won a Joseph Jefferson Award for Best Original Music for a Play, and has performed many times on American and European television and radio. Universally acknowledged as the world¹s most advanced diatonic harmonica player, Howard developed a fully chromatic style on the standard 10-hole diatonic harmonica, revolutionizing harmonica playing and taking the instrument into totally new territory. He is also an accomplished pianist and composer. Guitarist Chris Siebold has a seemingly limitless technique. Backing that up is an intensely soulful, expressive drive that makes him one of the most compelling guitarists playing in any genre today. Some of his originals also showcase his fine acoustic guitar and bouzouki playing, an unexpected treat.

Birch Creek Music Center is a summer music school in Door County.  Students are taught by nationally-known performers and educators during the day, and perform alongside them in concerts at night. The concerts are performed in the 500 seat Dutton Concert Barn, a 100 year old renovated barn.  These kids and their “teachers” are amazing.  This is music that shouldn’t be missed.

Not to be left out, the Egg Harbor Business Association has their concerts in the park every Thursday afternoon beginning at the end of June through  the first week of September. 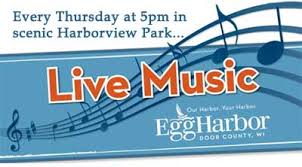 Bring your snacks, drinks and a blanket and relax in our beautiful Harbor View Park and listen to local Door County artists.  Then take a walk around our new harbor… check out our ” Art in the Park” or find a quarter and look out at the view on the dock binocular.  The concerts begin at 5 pm and last for and hour and a half or so…  just in time to walk to many of our great restaurants for dinner. Then head down to our beautiful marina and catch the sunset.  Check out the Egg Harbor website at eggharbordoorcounty.org for the schedule.

Looking for nightlife?  Mojo Rosa’s in downtown Egg Harbor has it… live music every Saturday night in their beer garden. Check it out…

So, if you are looking for music (and who isn’t), most of it free or at a nominal cost, check out Egg Harbor...Door County’s music mecca!