Yes, it is that time of year again… New Year’s Eve. Of course we love a parade and that is one of the best reasons to come to Door County… to ring in the New Year!  We have snow and the park trails are open for cross country skiing and snowshoeing. The snowmobile trails are also open. The weather is supposed to be pretty cold, so dress warm.

The Landmark in Egg Harbor is offering specials for the weekend (including Karaoke!) as are other lodging places and restaurants.  Mike’s Port Pub and Innlet Motel in Jacksonport is offering a nice special which includes lodging, dinner and drinks on New Years Eve for $175.00 (and no driving!).  Jacksonsport is also serving up a New Years Day breakfast at the fire station before the famous Polar Bear Plunge at noon.  Our friend, JR Jarosh of Jacksonport is the founder and along with his family, has turned the “plunge”  into an annual event that attracts thousands of people each year either as participants or spectators.  It really is a fun Door County event that shouldn’t be missed.  Trust me… we have done the plunge as well as witnessed it and there really is no equal. If you have never done the plunge, it is an invigorating way to start the year… especially after the crazy year we had this past year.

At 1:00 in Egg Harbor, is the Annual New Year’s Day Parade.  I  believe it is the only parade in Wisconsin on New Year’s Day.  It is a fun, quirky parade that is pretty much thrown together in the morning.  We (meaning my family) are in it every year… usually with the same float.  We aren’t original, but we are consistent. Here we are last year in our hot tub float…yes, there is really water in the cherry pallet we are riding in. 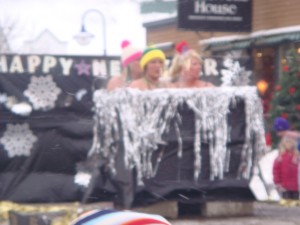 Almost all the boutiques and restaurants are open in Egg Harbor for post-holiday sales.  After the parade,  we head to Mojo Rosa’s where Kimmy has complementary hors d’ oeuvres and music.  Our friend and neighbor, Bob Erickson (Door County Realty) celebrates his birthday on January 1 and we help him celebrate at Mojo’s each year.  The day isn’t complete without checking out Egg Harbor‘s other haunts, John Henry’s, Casey’s and Shipwrecked.  PS… the new C & C in Fish Creek has reopened under the new name Cooper’s Corner (same owners as Shipwrecked and Peninsula Winery).  More on that later after I scope it out.

Have a safe and Happy New Year everyone and we look forward to a fantastic 2010 in  beautiful Door County!