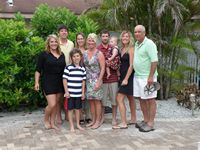 I haven’t blogged in awhile… we were in Florida with our family.  All four of our kids and our two grandkids were able to come as well as the “significant others”  so we really had a special vacation.  Nellie and I drove down and spent a day with her friend Chris Saladin who was in Clearwater, Florida at the time.  He works for comedian Craig Ferguson‘s stand up show so we got to meet Craig and see the show.  Chris was in the show as well so it was really a treat to watch it.  We then headed to our friend Ruth‘s house in Lakeland for a couple days where she treated us like royalty.  After that we drove down to the gulf coast were we had rented a house and the rest of the family flew in.  Our friends Paula and Lou Osadjan who have a beautiful summer home in Egg Harbor and own a condo on Longboat Key had us over for cocktails and took us out for dinner which was fun.   The weather was great and the we all had fun in the pool.  It was relaxing to get away but it is always nice to get home. 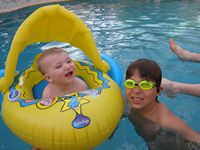 There have been a few new doings in Door County over the fall and winter… For instance,  when you go down the Fish Creek hill there are those cedars that line the road on the right.  Well, they cut a big chunk of those out which left a beautiful view going down the hill.  Our Egg Harbor Marina has had some setbacks (like a tug sunk!) but is progressing nicely.  The ice is out so when we begin our spring cleaning we won’t have a cold breeze blowing up the bluff at us.  On a controversial note, a developer has plans to build a Subway restaurant in Sister Bay and it is leaving a very bitter taste with many who live there.  There really isn’t an ordinance that says “no chains” as many of us always believed. We’ll see what happens.  Chef Andrew Mueller who was the head chef at Glidden Lodge for many years then bought The Nautical Inn Restaurant in Sturgeon Bay, has purchased the Hillside Inn in Ellison Bay which can only mean good things for Ellison Bay.  I love the Nautical’s food so I am sure the Hillside will be equally as popular.  Our friend and neighbor Bob Erickson of Door County Realty was named Realtor of the Year… congrats Bob!

Egg Harbor will host the YMCA’s Blossom Run May 8 and Egg Harbor will have its Girlfriends Great Eggscape weekend May 13- 15.  My friend Jeff Larsen from the Landmark Resort has tons of chick activities planned for the weekend.  Most of the festivities will be a the Landmark Resort although the boutiques in Egg Harbor will be having sales and there should be some restaurant specials as well as kayaking and a pub crawl.   Last year at Egg Harbor Lodge, we had Mexican food and drink at cocktail hour for our guests that Friday night so I am sure we will be doing something like that this year as well.  My margaritas were a hit and we have guys that also come that weekend so of course we had Mexican beer and snacks.

If you didn’t catch us on Living with Amy in the fall we posted the video on our video page… check it out.  Amy emailed me while I was in Florida to come cook on her show again, but obviously I couldn’t.  Hopefully a different time.

I am going to be blogging about some of Egg Harbor’s different boutiques and restaurants this spring so check back and see what’s new in the village.

One Response to What’s new…